Back to Latest Articles
In-Game Advertising

Not long ago we met advertisers in the traditional way – they offered and offer and we had the option to take action or not. It could have been a great deal, a new service, or...

Lately we’re seeing Groupon everywhere and it’s not because of their great marketing strategy. Most of us have read a handful of articles about Groupon, its business...

Amazon – the first ever affiliate program, or not

Amazon announced on February 2000 that it had been granted a patent on all the essential components of an affiliate program, as the patent application was submitted in June...

Liri Katz
Shopping Around For Cheap Prices [Not Mobile...
Posted on 29th May 2013 by Liri Katz

Most people may not yet be using smartphones to pay for goods when they are out shopping, but that doesn’t mean that they are not glued to their handsets anyway. Some research out today from Google indicates that among smartphone owners, some 79% can be classified as “mobile shoppers,” using their devices for some aspect of the shopping experience, from finding store locations through to finding goods. On top of that, among those who use smartphones for any kind of shopping or browsing, some 84% do so in physical stores. And when it comes to investing in experiences that consumers like, retailers should stick to mobile web sites: 65% of consumers prefer these to apps.

This means that while we are still slowly inching towards for one of the holy grails of mobile commerce — using devices for actual transactions at the point of sale — there are still plenty of retail opportunities to snag people along the way.

“Some stores promote their expanded inventory online or implement a price match guarantee to retain savings-hungry shoppers. Others are putting smartphones to use with QR codes that share more information about products, or apps with store maps and real-time inventory,”

“Whatever tactics marketers choose, it’s clear that smartphones are changing the in-store experience, and that winning the key decision moments at the physical shelves mean owning the digital shelves too.”

And while Google didn’t spell this out, this research also speaks to how Google appears to be spending less time these days pushing its own mobile wallet solutions, and more time presenting itself as an enabler of more holistic mobile shopping experiences.

Working with retail research group M.A.R.C. Research, the Google Shopper Council surveyed some 1,500 consumers who indicated that they use their smartphones for some form of shopping activity. Apart from finding that the vast majority of them use the devices in stores, they found the average time spent on shopping-related activities devices was around 15 minutes. Within that, the most popular service was not so much shopping, as it was shopping around: some 53% of respondents said that they used their devices for price comparison searches. The second-most popular service was closely related: it was looking for offers and promotions (39%). After that it was store practicalities — finding store locations (36%) and opening hours (35%).

Google and M.A.R.C. also looked into how users were using handsets in the lead up to going to stores. As you would expect, some of those practicalities around store logistics are more popular at that time. (These results also closely mirror some of the predictions that Google made about how mobile shopping was likely to play out in the months ahead.) 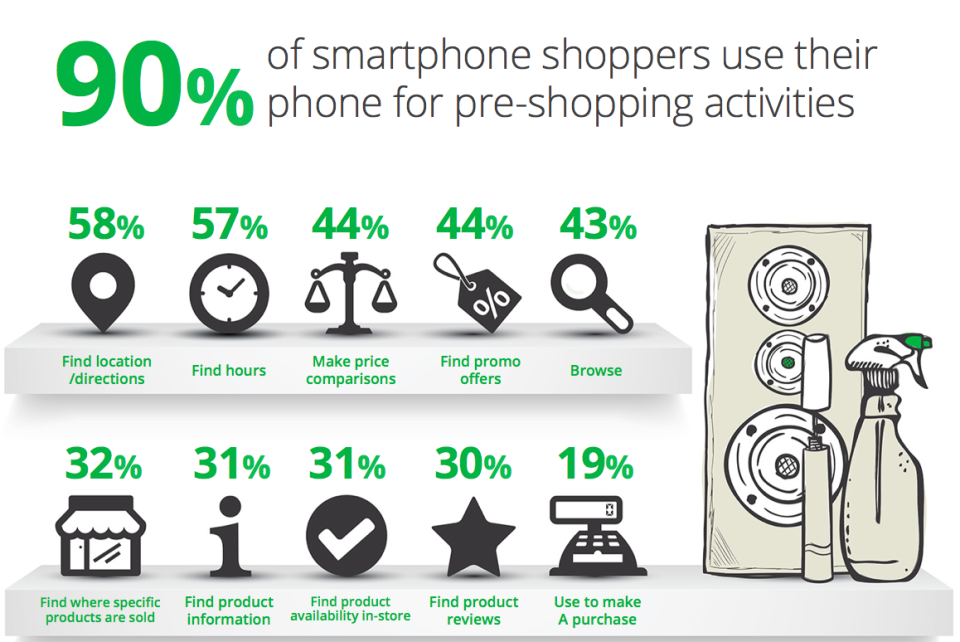 In reality, retailers potentially are caught between a rock and a hard place when it comes to mobile commerce. Short of them gaining the expertise and making the investment to capitalize on this themselves, there are a number of third parties tackling the opportunity of targeting shoppers who use mobile devices, and capitalizing on it. Startups like Shopkick, which in January of this year told me it was already profitable, has built a business partnering with major retailers like Best Buy and Target to offer users deals on goods while they are in store, with the offers pushed to them just as they are in the vicinity of the products. Shopkick says that usage of its app contributed to some $200 million in sales in 2012.

On the other hand, there are others that are actually seizing the opportunity afforded by smartphone usage to offer users cheaper alternatives that can be found via e-commerce channels. When Amazon launched its price check app in 2011 — a way for shoppers to quickly look up items just before buying them in store to see if they can find cheaper alternatives online (and on Amazon) — Forbes noted that it

The Google research seems to indicate that there is a clear opportunity to target avid smartphone users, as well as to encourage people to use their smartphones more: in general people using their mobile devices for shopping turn out to be bigger shoppers in general, with those buying health and beauty products increasing their median “basket size” the most, by some 50%. (Incidentally, Google doesn’t give any breakdowns between how males and females fare in these categories.)

In the wider world, apps have come to dominate how many interface with their mobile devices, but interestingly when it comes to retailers, mobile web experiences appear to be preferable to consumers. This may be because it is far more likely that a user will just want to look up information about something quickly rather than take the time to download an app in order to obtain information. Unlike Instagram, e-mail or your favorite game, it may be less likely that you will be returning to a retailer’s app on a regular basis enough to merit parking it on your handset.

Some of the research seems too directly self-serving to Google’s own interests — for example the stat that some 82% of mobile shoppers use mobile search to help make purchase decisions. But on the whole some interesting insights into the ever-growing connection between our smartphones and our wallets. The full research report can be found here

As year 2015 approaches the finish line, we can already look back and examine how the online media world has behaved so far. While some predictions were less accurate than others,...